Who is Lucas Smith? He is the leader of the vampire hunter group trying to rescue their town that has been infested with vampires in The Hunted. Lucas is the one everyone looks to, but he looks to his kid brother Chris.

See, before their world went sideways, Lucas was a jock, football star, and was focusing on the day to day of being a 23 year old taking care of his 17 year old brother after their parents died in a car accident. He was worried about college applications, and life moving forward.

Than a strange illness plagued their town, and his girlfriend died. A few days later she was back. Lucas had lost enough in his short life, and he was happy to have her back. Her promises of never losing one another were quite the temptation. If she had just stuck to Lucas, she might have pulled off her scheme.

As I wrote Lucas, I imagined a good looking guy who could fit into the football hero world, but who was also down to earth and very centered. It wasn’t until I was almost finished with the book that I was able to figure out who would be the perfect muse for Lucas, a young Chris Hemsworth, of course. He has the charisma and good looks, while also being very grounded and practical.

Lucas, and his brother Chris are the two main narrators of The Hunters, first book in The Hunters Saga. This series is a great urban fantasy/ horror series for those who believe vampires should be killed, not kissed.

The Hunters was re-released the beginning of January as part of the release of the highly anticipated sequel, The Hunted, which will launch February 18th. Come join the exciting book tour with awesome stops (like this one!) interviews, readings, radio spots, and more! See the tour Master List here 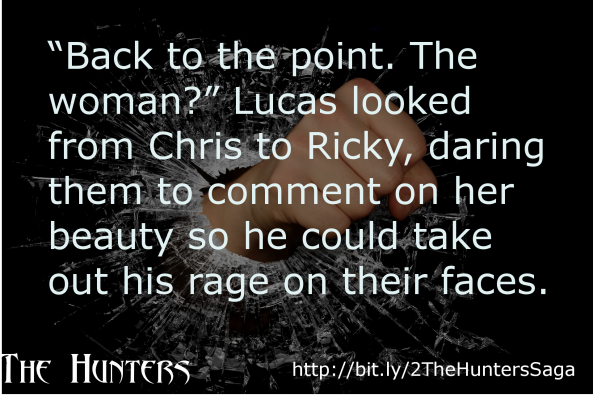