I’ve had some new tattoo’s on my mind for a while. I’ve asked some local shops back home for details, but not persued them because of having no time for anything. Well here in Cullompton, Devon I’ve had lots of time. We’re on holiday at Forest Glade Holiday park again. And here for a week.

I didn’t even know there was a tattoo shop here, till we walked past in on Monday 🙂 what a nice surprise it was. So I found them on facebook and sent a message to see about calling in. Which I did yesterday and their facebook link is –

I’d seen several pictures of the kind of thing I wanted to symbolise my past and where I’ve come from. The Semi-Colon Tattoo trend started in around 2013 and I learned of it around then. However, my suicide attempt was way back in 2001. A time where I was a very different person. No confidence, no strength. But I did find some strength. Admitting myself into the hospital was the best thing I ever did. And although no one at that time could really address the things going on inside my mind. It began a 6 year journey to become the person I am today.

Without attempting suicide that day, without the self harm when I was sexually abused at work in 2004 and without sticking my neck out and demanding I see someone properly for my continual eating disorder. I am sure I would not be here today. The depression and the battle against myself would have ended and not in a good way.

I am very happy with both my Tattoo’s today – I survived, and I’m free as the birds depicted here. 🙂

And for the other arm – 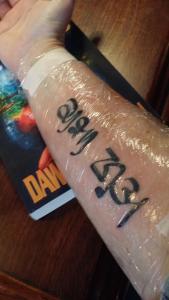 Team TSK is awesome. I adore everyone who has been here for me over the years…

Today marks that ‘new beginning’ today we reach for the stars!