It’s been a tough month over here. Things were working out great and then as usual, seems summer and the warmer weather strikes and then all kinds of things started to go pear shaped.

First we had a wonderful house guest. Sparky a Congo African Grey. We took her on because my husband really had wanted Bobby to be his best mate, but it didn’t happen. Bobby choose me. 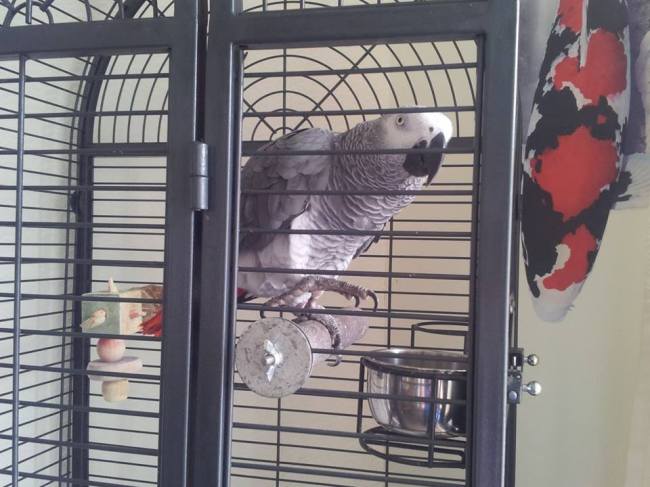 The great charity we got involved with through posting a picture of Bobby on facebook was passed onto us by a mutual friend. And we first met Sparky locally and she fell in love with Paul and vice versa.

Her favourite place in the house….

So after a very long wait and a home visit as I stated we brought her home. She was great with us for the first week and then as she settled she started biting. I’m not talking about little bites either.

Paul could do anything with her and I also did at first, but then she started to refuse to go back into her cage from your hand. And we had to resort to a stick/perch. This was okay till the day she decided on me to run up the stick to attack me.

Bobby was also very jealous, we couldn’t have him out with her in the room as he’d go to close to her.

She also decided that even though she was a man’s bird, she wanted me out of our house. She wouldn’t do anything with Paul when I was there. All she wanted to do was sit on me, and be with me. Also not fair to Bobby because he also choose me.

It was a very difficult decision and although she was only with us three weeks. She had a space in my heart despite the biting. He whistles and calls are still missed now. But she wasn’t for us. She went back to the charity and we have been told she’s now in a different location and doing very well.

At the end of the day we were thinking of her happiness and hope that she will find her forever home.

Bobby on the other hand is doing really well, growing in character every day.

The other things that have not helped are all the ‘vehicle’ problems we’ve been having. One thing after another and they started to get really expensive when we were only just getting things back on track. So we’re back to square one financially. With nothing left.

Luckily though to some extent the summer holidays are here and Paul has lots of time there to work extra hours. Anything he does will be saved then for our trip down south in August to the Koi show.

One of the strangest things that has happened in the last month is meeting and helping out a great gentleman with his Koi.

My husband is a cheeky person, so after seeing a filter system up a driveway stopped to ask if it was for sale. The lady said it wasn’t but that her husband was putting it on his pond. Paul tried to sell her some fish too, that’s when she mentioned about all the problems they were having with their fish. They were dying.

Being as helpful as he was he offered my services. And when the husband rang up a few days later we went around to his house to help out.

In the house and after meeting the son, the owner walked in. Weird as it was, he happened to be a customer of mine already with company I work for, (delivering food to their workplace)

So, it’s been a roller coaster helping him out with his sick fish and in moving things around and doing things at home too.

We had some big issues with our own pond with pumps failing and pipework popping off. Eek… but we’re getting back on track there too. Thankfully.

As for my writing I had to put it on hold for a good few weeks, I’ve not had the energy or the time to put the work in, and I can’t do it if I’m overloaded because it wouldn’t be doing the story justice either. I’m hoping that August will be better and that I can put things back on track.

Best Friends is heading into the next stage again, series 2 🙂 I’m looking forward to getting more work done on that. And all my sci fi projects are moving forward too. It’s great to be part of such good teams. Working with others is amazing.

Work, well it’s really also taken off. My run has been doing very well and this Monday I’m heading out in a newer and bigger van. When you swap van’s it’s like moving home as you really do get used to the vehicle you drive.

Think I’ve sort of caught you all up. I hope everyone is doing well. Missed having the time to write and so hope that I can be back at it. Catching up with the blogs I’ve missed reading too.